Choosing Sash Types for Windows of Your New Home 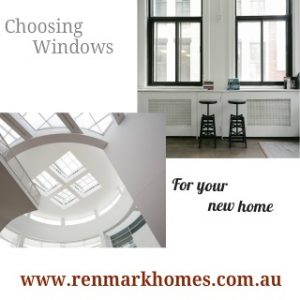 There are many components to building a new home and selecting designs and styles can be a fun part of the process. When you want a home to truly be your own then a custom home affords you that option. So in this article we look at sash types for windows as a consideration for styling your home.

Are Window Styles Really That Important When Building a New Home?

Windows play an exceptionally important role in a home.

Traditionally not a lot of thought has been given to window options for homes. They were seen as a means of getting light and air into a room and beyond that they were taken for granted. As homes have become larger and more complex so too has the styling of the house window.

With greater demands on energy efficiency and a move towards more individual custom homes, the window has evolved to become a key element in the design, functionality and live-ability of a home.
Traditionally the window was made of timber, not overly large and was predominantly double hung. With the introduction of aluminium, the configurations of the sashes became more flexible with greater emphasis on size and operating mechanisms.

Today there are many different window and door designs available with a vast variety of features from which to choose. It’s important to determine what your personal requirements are and ensure they match your site conditions.

Styles, Considerations and Types of Windows For Homes

The opening part of a window is known as a sash window. A window is made up of the sash and separated from other panes of glass by the frame, fixed lights and bars such as transoms.

There is an incredible range of windows available to suit nearly any function and personal aesthetic choice. The trick is to choose a style in line with the home you want designed and that does require  advice. Talk to us about what you have in mind and we’ll guide you.

Below are the main window types sold in Australia. It is important to note that these are the basic window configurations and in many cases these windows can be coupled together to create larger windows that may have a mixture of sashes to make up the window.

Other minor additions can be made to these windows to suit certain styles of homes. Colonial bars and arches are a good example where a window can be dressed up to look similar to an older style home.
Different styles of windows provide different opening areas which will suit certain rooms of the home.

Living areas for example tend to have the largest and most windows to allow for maximum light and ventilation. Bathrooms on the other hand will have smaller obscured windows for privacy. Placement and size of the windows is a job for the designer whereas the type of window, dressings and material, and to some extent glazing, is up to the individual. Glazing these day is driven by the House Energy Rating report (HER). That said the majority of buyers will opt for double glazing these days due to its superior insulation and sound reduction.

It’s also useful to consider maintenance needs when making your home window selection. Hinged windows generally have lower air leakage rates than sliding windows, therefore increasing their energy efficiency. In contrast sliding windows are an easy to maintain option only requiring an occasional clean of the tracks and glass.

You may find that you need different window styles throughout your home depending on design preferences, the direction that your windows face and your local climate. New window styles are being developed all the time so it’s worth us giving you some advice on that. The images below give you an idea of some of the types of windows you may consider in the building design process. 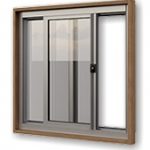 The sliding window is the starting point for most entry level windows. These are mostly made in aluminium and one of the cheapest sashes available. The sliding window looks best in a larger size and suits rooms to the side and rear of homes for those people on a budget.

These windows slide open horizontally, can feature two or more sashes and offer a nice clear opening for good ventilation.  They are considered a budget window and are often used in volume builders’ homes. They can be double glazed, are lockable and the fly-screens are fitted externally. 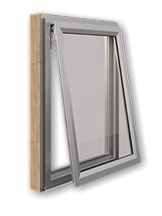 Awning windows are stylish additions to a home when used properly and are seen in the majority of new homes today. The awning window has hinges at the top and swings outward. It seals better than a sliding window and hence is better for energy saving and weather proofing.

There are some disadvantages of the awning window, such as restricted opening which can affect ventilation and are not really suited to ground floor areas with narrow access due to the sash protruding out.

They do not make a good escape window and as such are considered a more secure window to the other types of sashes. Fly-screens are fixed externally and they come with keyed locks. They will handle double glazing and are popular in timber and aluminium.

The casement window is side hinged and opens out like a door. They are popular in the some of the reproduction homes such as French provincial and Georgian. This style of window is commonly seen as either a double or single configuration and is perfect for tall narrow applications and in areas where it is long and narrow.

One of the downfalls of the casement is that fly-screens need to be installed from the inside. The more mainstream manufacturers often present these windows without keyed locks. They are also considered an upmarket window so can be a higher cost than other types of windows. Casement windows are available in timber, aluminium and PVC. 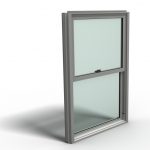 Double hung windows open vertically. Both sashes of the window normally slide, and screens can be installed outside of the window frame. Best remembered as for their weighs inside the frame, the double hung has come a long way from what was originally used in the older style homes.

Today the double hung window will fit equally in a modern style home as the period home. They are available in timber, aluminium and PVC. The pulley system which you still see in the older style windows, has long gone and they operate smoothly on a spring loaded track.

The sashless window in a frame-less version of the single and double hung window. They are considered an architectural window and are often seen in more contemporary homes where a minimalist look is called for.

These are quite expensive and as such are used in specialist applications or as a feature in a room. 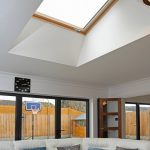 Roof window, often referred to as a v lux (Brand Name) are used in areas where it is difficult to get a window in an external wall. The roof window is a fully functional window which can be opened for ventilation.

They can be manually opened or are now available with electronic remote control. They even come with rain sensors and built in shading devices making them a popular addition if you have the budget modernize and automate your home.

The roof window will give more light to a room as it points direct to the sky. However, it is also exposed to direct sunlight which can be an issue for heat transfer. They are also less functional being mounted up high. A cheaper alternative to a roof window is a skylight. The sky light however only assist with light and not so much with ventilation.

The butt joined window is a corner window where the glass butts into itself and not a frame. It is used as an architectural feature in homes and is a great way to capture un-obstructed views.

One problem with the butt joined window is it cannot be double glazed which can be an issue where double glazing is required.

A cheaper alternative to the butt-joined window is having 2 windows coupled together to create the corner window. This however will have a window frame in the corner where the two meet. 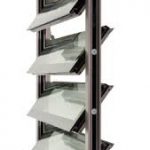 You’ll often see these on properties if you go up North for holidays as they are more common in the warmer states where cooling a home is more important than heat retention.

Louvre windows allow you the greatest flow of air than any other window when fully open. The air flow is able to be varied by changing the pitch of the louvres, or in large openings by closing some blades and leaving others open. 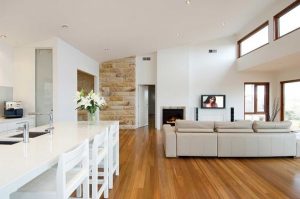 Traditionally narrow bands of windows across the tops of buildings, these are used as an architectural feature to homes with large raked ceilings.

Clerestory Windows are an excellent way to get northern sun into south facing rooms.

They can be fixed or have the option for opening and are often used to compliment the windows and doors below, on an above-average high wall. 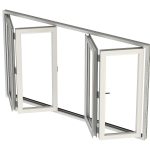 Bi-folding windows are a specialist window used in applications where you wish to open the windows to have a large unimpeded view or opening. While this option is more popular as a door, the window option is great for linking up two spaces.

Most commonly used in a kitchen linking the kitchen to an outdoor area via the window. The bi-fold can be any size as it is a series of independent sashes hinged together to slide along a track. They can all slide one way or open from the middle and have half slide left and the other half right.

Some disadvantages are they are expensive and difficult to apply a flyscreen. The are also higher in price and it is hard to open them just slightly if you were just after limited air flow.

A Final Note About Windows for New Homes

As you can see, there are quite a few options available to you but it is important  to consider the design and style of your home when selecting window types. If you are ready for some advice, speak to one of our experts on 1300 367 245 or send us an enquiry.